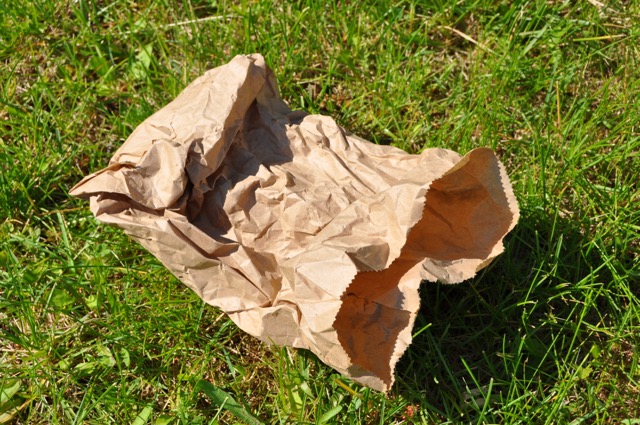 I am the lad with the paper bag lunch. Five barley loaves and two small fishes. The food of the poor. Coarse, dark bread, that kind that gets shared with animals. Dried fish, just a little something to spread on the bread and stave off the gnawing in my stomach.

Perhaps I did open the bag in a surge of generosity, inspired by the great and mysterious rabbi. Perhaps I wanted him to notice me. Perhaps I truly wanted to help. Or perhaps I came along hoping to make a profit, to sell to the all the suckers who came unprepared, disciples included. Perhaps I’m just looking for my next meal. You never know.

But that’s the point. Does it matter whether I’m some boy-hero, ever to be lauded for my humble offering, or whether I’m Galilee’s own Oliver Twist, scraping by on the pennies of the religious multitudes?

Does it matter how I got here? Or only that, at the end of the day, what I counted as mine is now in the master’s hands?

Who can say what hopes and hoarded manna we carry around in brown paper bags. All I know is, it’s not enough. It’s never enough.

And yet, he gave thanks. For my sack of crumbs. Others could have brought more, and better. He could even have created the feast from nothing. Some days nothing seems more appealing than what I’ve got.

But he thanked me. And he thanked God. As if we were in cahoots somehow. And he uttered one of those upside-down blessings than turns the poor into kings and the beggars into sons. With his own flesh he broke the bread and began to feed the whole wide world, right there on the grass. Barley loaves have never tasted so good.

Please sir, I want some more. I can’t even look him in the eye, and my bony knees are trembling. The paper bag is crumpled in my hands. “Have as much as you want,” he says. And I let go of the bag.

I am the lad with the paper bag lunch. Does it matter how I got here? Or only that, at the end of the day, what he counted as his is now in my hands.